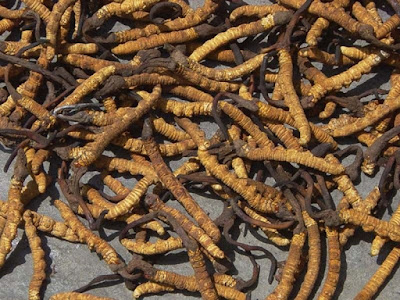 Cordyceps Sinensis - Medicinal Fungus
Cordyceps sinensis,Aweto,Chinese Caterpillar fungus, Ophiocordyceps, Hisutella, unilateralis, Winterworm summerherb.
Cordyceps sinensis is considered a medicinal mushroom that increases energy, stimulates the immune system, and acts as an overall tonic to the body. It is one of the more famous Chinese herbs, but has only gained attention in the West over the last few decades.
Cordyceps or Cordyceps Sinensis is a rare parasitic organism. It is natures cross marriage of the insect and plant kingdom. The fungus mushroom has been found to be effective in curing lots of illnesses including coughing, allergy, liver, lung and kidney dysfunction.
There are many reported cordyceps health benefits. Some of these include:
1.    Cholesterol reduction
2.    Stimulation of the immune system
3.    Faster recovery from bronchitis and respiratory diseases
4.    Increased efficiency and stamina of the circulatory system
5.    Anti-tumour properties
6.    Liver protection and enhanced recovery from chemotherapy
7.    Improve Sex power (cure for erectile dysfunction)
8.    A general body adaptogen, resulting in more energy, strength, and stamina
The reasons behind some of these benefits are still not fully understood. Yet research has found some promising proof behind cordyceps claims. A few of the helpful constituents found are:
1.    Sterols - Alcohols of the steroid group. Believed to lower cholesterol, reduce the risk of heart disease, and possibly have some anti-tumor properties.
2.    Polysaccharides - Complex carbohydrates made up of chains of sugars. Known to stabilize blood pressure, have an effect on free radicals, and stimulate the immune system.
3.    Nucleosides - Organic molecules that are the converted into building blocks of the genetic material DNA and RNA. Nucleoside drugs are sometimes used to treat cancer.
One of the most useful things that Cordyceps sinensis appears to do is the simple act of oxygenation. The fungus dilates the airways in the lungs, resulting in more oxygen to the blood. Thus more oxygen reaches every cell of the body, resulting in better cell function and greater energy levels.
Ordyceps Sinensis / Yarsagumba
Yarsagumba with its Latin name cordyceps sinesis literally means summer plant and winter insect in Tibetan. Before the rainy season begins, spores of the cordyceps mushroom settle on the heads of caterpillars’ that lives underground. The fungus gets so much into the body of the caterpillars’that it grows out through its head and drains all the energy from the insect and ultimately it dies.
Yarsagumba or Yarchagumbu is an exceptional and incredible herb that grows in the pastures above 3,300 meters upto 4000 meters in the Himalayan regions of Nepal, Bhutan, India and Tibet. Yarsagumba literally means summer plant and winter insect (dong cong xia cao) in Tibetan. In India it is usually known as 'Kira Jhar' which means Insect Plant. Scientific name of this herb is Cordyceps Sinensis.
Yarsagumba is increasing and it has been regarded as an expensive lifesaving tonic. Headache, toothache or any other disease - yarsagumba is the remedy. And not only that, it is also believed to be a cure for sexual impotency – a Himalayan Herbal Viagra. Yarsagumba is also known as the "Himalayan Viagra" or "Himalayan Gold".
It is found that the body of Yarsagumba contains:- Cordycepin acid, Cordycepin, D-mannitol, Polysaccharide, SOD, Fatty Acid, Nucleocide Protein, Vitamin A, Vitamin B1, B2, B6, B12, Serien, Zinc, Copper, Carbohydrates etc. Cardycepin and Cordycepic acid have been found to be the main constituents.
·       Cordycep sinensis is used for lung and respiratory infection, pain, sciatica and backache.
·       It also provides vitality and increases physical stamina of the body.
·       Yarsa gumba is used to cure chronic hepatitis B and immune function such as dysfunctioning of liver.
·       Cordyceptin is found effective against tuberculosis as well as in the treatment of leprosy. Another major use of this is in the treatment of leukemia.
·       It is useful for children, adults, the aged and the sick people.
·       It energizes lung, kidney and liver; improves memory and purified blood; keeps a person physically and mentally sound.
·       It is of great importance for men and women of any age group, players, people working in physical stress, suffering from premature ejaculation and sexually inactive ones.
·       It gradually empowers internal energy of our body in a natural way as well as acts as a powerful aphrodisiac.
·       Unlike Viagra, it does not cause any mental problem or any other type of physical damage or malfunctioning.

Ophiocordyceps sinensis is a fungus that parasitizes larvae of ghost moths and produces a fruiting body valued as an herbal remedy. The fungus germinates in the living larva, kills and mummifies it, and then the stalk-like fruiting body emerges from the corpse. It is known in English colloquially as caterpillar fungus. Of the various entomopathogenic fungi, Ophiocordyceps sinensis is one that has been used for at least 2000 years for its reputed abilities to treat many diseases related to lungs, kidney, and erectile dysfunction.
Ophiocordyceps sinensis is known in the West as a medicinal mushroom. It is used as an aphrodisiac and treatment of fatigue, cancer, night sweating, respiratory disease, hyperglycemia, hyperlipidemia, asthenia after severe illness, arrhythmias and other heart diseases and liver disease although such use is mainly based on traditional Chinese medicine and anecdote. It is used as a reputed curative to many diseases, anti- aging, hypoglycemic, aphrodisiac and also treatment against cancer. Ophiocordyceps sinensis serves against kidney and lung problems and stimulates the immune system.

This herb indicates a possible improvement in sexual function.

Cautions
This supplement isn't for everyone. Those who shouldn't take it:

Blog Directory | Submit to Directories and Promote your Blogs